Have you ever wanted to know how to defend yourself against people that might hurt you?  Then Taekwondo is right for you.  You can learn it at ATA here in Sulphur Springs, Texas.  Some students showcased their talents one week in a national tournament.

Taekwondo is a style of martial arts that originally came from Korea.  It’s one of the oldest forms of martial arts style.  The word Taekwondo means, “The way of the Hand and Foot”.  ATA’s style is specifically Songahm Taekwondo, which means pine tree and rock.  It likens the journey of a martial artist to grow like a tree.  Growing from a seed, to a sapling, to a tree, then planting another seed that will hopefully create the next generation of ATA.  ATA was first established in 1968 by Eternal Grand Master H.U. Lee. 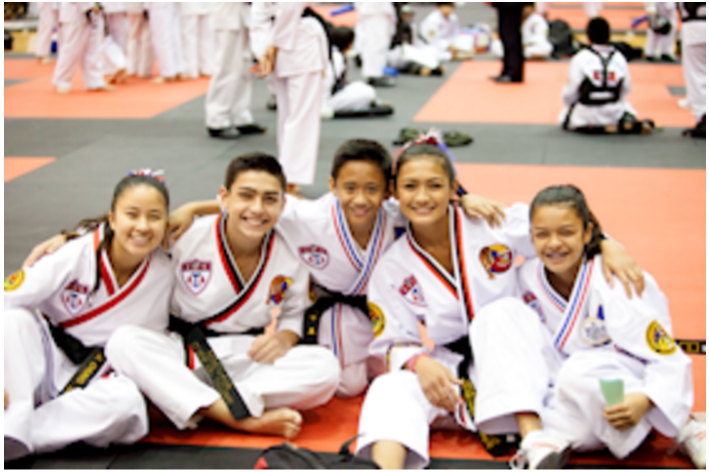 This year the ATA has hosted a tournament called the ATA Regional Level tournament.  There were people from Texas, Louisiana, Oklahoma, Arkansas, and Illinois at the tournament.  They had roughly 1,000 spectators at this tournament.  People came and watched for just a nominal fee of $5.  The tournament was a two day tournament with 650 competitors.  Day 1 was on Friday, November 13, 2015. That day hosted 4th and 5th degree black belts as well as the adult creative and extreme competition and the team sparring and combat events.  It started a 6:45pm. Saturday, November 14th hosted the Tigers  (pre-school) Junior (ages 7-17) and adult forms, weapons, sparring, combat sparring, creative, and extreme events for both colored belts and black belts.

You must be a member that has good standings to qualify for ATA regional tournament.  Also, you can get in the tournament by competing places and placing in them.  Then, you are awarded a certain number of trophy points.  Each competitor is allowed to 5 regional level tournaments towards their point standings.  These point add up over the year and at the end of the year the person with the highest point value is awarded the title State Champion.  The top ten point holders will be invited to districts to compete with people from Texas, Louisiana, Arkansas, New Mexico, and Oklahoma. The winner of this event will be crowned District Champion.  Finally, the top ten National point holders will be invited to support the U.S.A. by competing against people from Korea, Chile, Brazil, South Africa, Argentina, Uruguay, Paraguay, and many other countries from all around the world.  If you win this you will be titled the World Champion, which is the highest prize ATA has to offer.

This tournament was not just for trophies or bragging rights.  It was also to allow you to make new friends, put some nerves that you didn’t even know to the test, and display some incredible skills. In reality, competition is not just in the ring.  Students training in Songahm Taekwondo, as well as all other human being are competing with self on a daily basis.  In reality we compete with our body to lose/gain weight, our minds to gain knowledge, and we compete with our intellect on our spiritual convictions.  It’s just like a match. They not only compete with the competitors skills, they have compete against themselves for their best match they can possibly do.  Therefore, tournaments are a great opportunity for increasing skills as well as boosting confidence tremendously.

Some of the most exciting battles were the 4th and 5th degree black belts (on Friday night) and the Teenage Creative and Xtreme Competition (Saturday night).  Melissa Burcham says, (She looked forward to some high flying gymnastics and martial arts set to some music.  The students who came out victorious are students who spend countless hours in the gym, in private lessons, and in personal practice.” They were divided into fair divisions based on age, and rank or experience. Rather like UIL competition there are many different events and age groups.  The outcome of the tournament for Sulphur Springs was 25 gold medals, 28 silver medals, and 31 bronze medals.