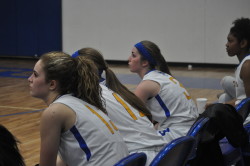 The Lady Cats’ basketball team saw a big lead evaporate in the fourth quarter as Hallsville stormed back to take a 49-47 win in Wildcats Gym Tuesday night. After Lady Cats leading scorer Kaylee Jefferson fouled out, it appeared the Lady Cats would rise to the occasion and they built a double digit lead about halfway through the final quarter. Then Hallsville turned up the pressure forcing turnovers and started hitting three point shots. Still the Lady Cats clung to a one point lead with only 20 seconds left. One final turnover led to a Hallsville 3-point play for the lead. Two missed free throws ended Lady Cats’ hopes. Lady Cats Coach Jeff Chapman said the loss was no one player’s fault. He said the team had to learn how to handle pressure better. The Lady Cats committed 27 turnovers in the game. After the game Coach Chapman told his team that they can’t let this disappointment affect future games. He predicted his team would pick each other up and go play. He noted they had to fight to get where they were and he said they would continue to fight to keep going. The Lady Cats fell out of a first place tie. They are now 4-2 in district play and 17-6 overall. They’ll travel to Pine Tree Friday night for a 6:30 p.m. game.

Hallsville can be a tough place to play and the Wildcats didn’t buck the trend Tuesday night. Hallsville ran a stifling press at the Wildcats and keep it up almost all the way until the end. The Wildcats fell into a big hole and trailed 41-14 at the half. Hallsville eventually won 94-43. With the loss the Wildcats dropped out of a fourth place tie as they are now 1-3 in district play. Their season record is now 8-12. The Wildcats will attempt to jump back into the win column as they play host to Pine Tree Friday night at 7:30 p.m.