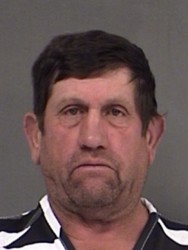 A 60-year-old Como, Texas man was arrested Sunday evening for Obstruction or Retaliation. Sheriff Deputy Sergeant Wade Sheets responded to a disturbance call at a County Road 3562 residence shortly after 7 pm Sunday. Upon arrival, the accused subject began to verbally threaten Sgt. Sheets. According to an arrest report, the man shouted “Don’t [expletive] with me” and that he would “Blow your [expletive] head off!” The man’s brother made an attempt to calm the suspect down. Sgt. Sheets arrested the man at 7:15 pm Sunday and transported him to the Hopkins County Jail.