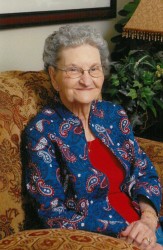 Funeral services for Maxine Johnson, age 92 of Dike will be held at 10:00 a.m., Wednesday, December 23, 2015 at Murray-Orwosky Funeral Home with Eric Godwin and Malcolm King officiating.  Interment will follow at Nelta Cemetery with grandsons and great-grandsons serving as pallbearers.  Honorary pallbearer is Anita Clayton.  Visitation will be held from 6:00 – 8:00 p.m. on Tuesday, December 22, 2015 at Murray-Orwosky Funeral Home.

Maxine passed away on Saturday, December 19, 2015 at Hopkins Place.

She was preceded in death by her parents; husband, Ellery and son, Max Johnson.