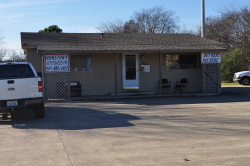 Along with the new Hodge Chevrolet dealership, which is set to open on Wildcat Way in January, a local car dealer plans to move his dealership to a location on Gilmer Street. Hometown Auto Sales, owned by Tim Merrell, has been operating from their League Street lot for many years, but has purchased land on Gilmer Street and plans to build a new office building and a lot to hold up to 30 cars.  The new location will be at 1017 Gilmer is property formerly occupied by AES Alternator and Starter.

Merrell comes by the car business as a “family tradition.”  He has operated his own lot full time for the past ten years, but worked at his father’s lot since a young boy.  Also, his extended family includes the Stubblefield’s who owned a car lot on Broadway for many years.  Merrell plans to start construction on the new office in January and, with good weather, hopes to have it opened by March 1st.  He tells KSST news that there is “a growing need for special financing that some of the big dealerships can’t offer.”  His lifetime experience trading cars has served him well in meeting the needs of his customers.