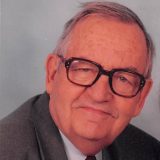 Mr. Davis was born on May 20, 1925 in Little Rock, AR, the son of Jefferson Emmett Davis, Sr. and Mary Thompson Davis.  He married Martha Demaree on September 1, 1946 in Indianapolis, IN.  She survives.  Mr. Davis was career military.  He served in the United States Marine Corps during WWII for 3 years and then the United States Air Force for over 23 years as a Chaplain.   He graduated from Arkansas A&M College and Perkins School of Theology.  He was a lifelong member of Rotary International and a Paul Harris Fellow.   He was a member of Charleston United Methodist Church.

In addition to his wife he is survived by son, Jeff Davis and wife Betty of Hopkins County, daughter, Cathy Sultenfuss and husband Ben of Nacogdoches, TX, grandchildren, Jay Davis of Kerrville, TX, and Tracy Robertson and husband Troy of Bonham.

Memorials may be made to Avery Food Bank c/o of Avery United Methodist Church.