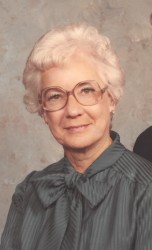 Alvira passed away on December 26, 2015 at Wesley House Assisted Living.  She was born on March 28, 1919 in Hunt County, the daughter of John L. and Myrtle (Hart) Williams.  She was married to Cecil Dickens on February 2, 1941.  Alvira was a homemaker and a member of the League Street Church of Christ and the 39’ers church group.