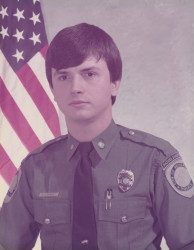 Funeral services for David Kenney, age 64 of Delta, Utah will be held at 2:00 p.m., Tuesday, December 22, 2015 at Seymore Church of Christ with Adam Teer officiating.  Interment will follow at Seymore Cemetery with Kim Kenney, Michael Kenney, Clay Daniel and Mickey Kelly serving as pallbearers.  Honorary pallbearer is Steve Daniel.  Visitation will be held from 6:00 – 8:00 p.m. on Monday, December 21, 2015 at Murray-Orwosky Funeral Home.

He was a retired police officer, private investigator, and photographer.  David was a proud member of the Professional Photographers of America and was raised Church of Christ.

Survivors include his sister, Kay Kenney of Grand Prairie; niece, Jessica Richards and nephew, Mickey Kelly.  He was preceded in death by his wife and his parents.