Stinson Named Family and Consumer Science Teacher of the Year 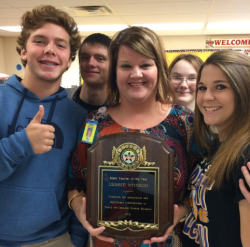 Sulphur Springs High School teacher Ms. Debbie Stinson was named Family and Consumer Science Texas Association Teacher of the Year earlier this year at the FCS teacher conference in Dallas. She received an all-expense paid trip to Johnson & Wells University Culinary School in Denver Colorado as well as a plaque commemorating her honor.

Nominated by Johnna West and Dana Allmon, fellow teachers in Region 3, Stinson completed an application process following nomination. She won on the regional level and competed against winners from four other regions in Texas.

Stinson has been teaching at SSHS for 18 years and has been teaching Family and Consumer Science for 25 years. She is an advisor to 15 regional FCCLA officers and vice chairman of the state FCCLA Board. She has served in each office position of FCSTAT including President.