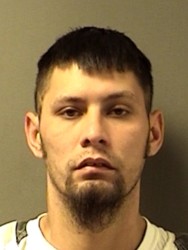 A second man has been charged in a shooting incident that took place October 11, 2015 on Ingram Street in Sulphur Springs. Michael Anthony Garcia, 28, brother of Jesse Luis Vasquez, the victim in the incident, has been charged with aggravated assault with a deadly weapon, tampering with evidence, and a felon in possession of a fire arm, according to SSPD Chief Jay Sanders. Garcia turned himself in to Sulphur Springs Police this week. He was arrested Monday, October 19 and placed in Hopkins County Jail. At a magistrates hearing, he was placed under a total of $50,000 in bond for the three charges. He was released on bond Tuesday October 20.

Sanders stated that witnesses at the scene reported a white male having left the scene. During questioning, an individual who had arrived at the scene informed officers that a man was behind a building near Dairy Queen on Main Street and wanted to give himself up. Officers arrested Justin Joe McQueen. McQueen had injuries to his knees from jumping a fence. He was taken to HCMH ER where he was treated and released to Hopkins County Jail.