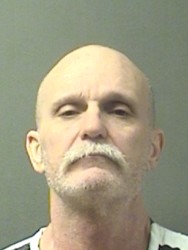 Tuesday morning, October 6, 2015, just before his jury trial was to begin in 8th Judicial District Court, Franklin Coy Kuhl, Jr., 51, pled guilty to trafficking a child for the purpose of engaging in sexual conduct. The child was a 13-year old. Following his plea, the jury began hearing the punishment phase of the trial shortly after 9 a.m. Tuesday.

Kuhl could face up to 25 years to 99 years or life after the District Attorney Will Ramsay arraigned Kuhl on enhanced charges before the court and jury. Kuhl pled true to four previous convictions including a 2004 conviction of possession of a controlled substance, a 2003 conviction of bail jumping and failure to appear along with a 2003 DWI 3rd arrest. In 1985, Kuhl served time in prison for escape. Kulh has previously been imprisoned twice and has been on parole three times. He was on parole at the time of the current charge.

On Monday, a 12-member jury was picked to hear the case. Kuhl was accused of taking a minor from Hopkins County to Hunt County for the purpose of sex. He pled guilty to taking the child to a Motel 6 in Greenville and participating in sexual activity multiple times during a day in February, 2014.

His arrest followed the mother of the minor reporting the event to an administrator at North Hopkins School. The activity of the child and Kuhl was discovered when the boyfriend of the mother found the hotel key in the minor’s possession. The school administrator contacted the Hopkins County Sheriff’s office. At that time then Sgt. Brad Cummings responded and passed the case on to Chief Criminal Investigator Lewis Tatum. Tatum, after interviewing the child in the presence of a female staff member at the school, transported the minor to the Child Advocacy Center in Winnsboro where a professional forensic interview. At that time the minor stated that she had been raped. However, further investigation showed that the child had been manipulated into consenting to the acts. Her cellphone was later discovered and showed a number of messages between Kuhl and the child.

District Attorney Ramsay said the text messages between Kuhl and the child would allow the jury to “see the sickness of this man.” Ramsay pointed out that Kuhl was first in prison 15 years before the child was born.

Defense Attorney Frank Long addressed the jury saying that the minor had fooled her school counselor and the forensic investigator when she said that she was raped. He said that the child could fool adults and he questioned “Who manipulated who?” Long sought to convince the jury that Kuhl had taken responsibility for actions. Even though Kuhl was in Louisiana when local law enforcement sought him, Long said that Kuhl had contacted the sheriff’s office to turn himself in to law enforcement. Criminal Investigator Tatum could not confirm Long’s statement. Tatum did remember that Kuhl was arrested at a motel in Bossier City.

Kuhl’s now ex-wife testified that she had believed Kuhl innocent at first but she had told Kuhl she had looked at his computer and cellphone and he had asked her how much she knew. At that point, she lost confidence. She divorced him and is now married to another.

Tuesday afternoon, the victim took the stand. She identified three sets of multiple pages as copies of text messages sent between the two. In the texts, Kuhl had written “Love U more than you will ever know”, “till death do us part”, “Love U baby more than anything in the world”, and “Got to make my baby girl some $” followed by a series of letters that she identified as a kiss. That symbol for kiss was also used in multiple texts. In one of those texts, the symbol was followed by “with a little tongue”. The pages also included her responses. One text from Kuhl stated that his wife had seen an old text between the pair and he had told her it was just playing around. The texts date back to August 2013 when she was in 7th grade. The minor stated that the texts had started as flirting but resulted in physical action.

The victim said she had sex with Kuhl prior to the February 2014 visit to the Greenville motel. She responded to questions from the DA acknowledging that Kuhl had driven them to the motel and had acquired the room on an early morning Saturday. She said they had sex then went to McDonalds and Walmart before returning to the room. She said she thought it was a good day. She had told her mother that she was going with Kuhl to hang out with his boss’ daughter. On the way back to their home that day, she asked Kuhl what the girl looked like that she was to have spent the day.

She told the jury that she thought they would get married. She also testified that she had stated she was raped when questioned by a forensic investigator with the Child Advocacy Center because she was embarrassed. When questioned by Defense Attorney Long, she said that she knew what sex was before she had sex with Kuhl. However, she said he had taught her more about sex.

The defense did not call any witnesses and Kuhl stated to Judge Eddie Northcutt that he did not wish to testify. As both defense and state closed their case, Judge Northcutt dismissed the jury panel for the day with instructions not to discuss the case. The afternoon session had begun with a juror being dismissed for having formed an opinion prior to the conclusion of testimony and having shared that opinion with another juror. An alternate juror was placed on the panel of 12. There were three alternate juror who had been hearing testimony throughout the day.

The judge will instruct the jury Wednesday morning at 9 a.m.