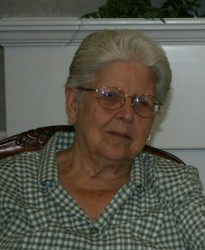 Mrs. Pennington passed away Monday, October 5, 2015 at Carriage House Manor.  Mrs. Pennington was born on November 25, 1928 in Hico, TX, the daughter of Hester D Jones and Gertrude Lillian Grubbs Jones.  She married Walter Spurgon Pennington on May 14, 1960 in Brownwood, TX.  He preceded her in death.  Mrs. Pennington worked as a switchboard operator for Southwestern Bell Telephone, she retired from Grocery Supply and worked for Joe Bob’s Convenience stores for many years.  She was a member of Immanuel Baptist Church.

In addition to her husband she was preceded in death by her parents, a son, John Harris Funderburk, Sr., sister, Hester Delores Sparkman and one great-grandchild.

Memorials may be made the American Heart Association at www.heart.org.