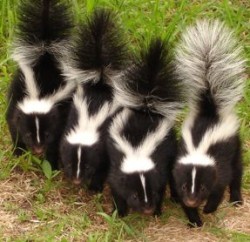 According to Chris Menges, DVM, MPH, Regional Zoonosis Control Veterinarian, Region 4/5N (Tyler) Texas Department of State Health Services, over the last couple weeks, two (2) more positive-for-rabies skunks have been found, one in Delta county, and the other in Rusk County.

In Delta County, as a man worked on his truck with his dog lying under, a skunk decided to join them.  The dog noticed first and took off away from the skunk into the garage as fast as possible.  The skunk promptly chased the dog into the garage, where the man’s wife was working on a table.  She immediately jumped on the table as the dog continued to “head for the hills”, according to Dr. Menges.  The skunk, tired of the chase, moved on to attempting to knock the entire home over by head-butting it repeatedly.  During this distraction, the man and his wife retreated to the front porch and the man was able to obtain a gun from inside the front of the home.  The skunk, making no headway against the house, now refocused on the man and his wife.  This time the couple moved off the porch and around to the side of the house, but the skunk continued to follow.  It was here where the man shot the skunk multiple times.  He was loaded into plastic bags with the help of gloves and a shovel.  No known exposures occurred.

In Rusk County, a woman saw a skunk wandering through a pasture across from her home.  The skunk then decided to head towards the home.  She told her husband, who killed it.  They called Animal Control who collected it appropriately.  There were no known human or animal exposures.