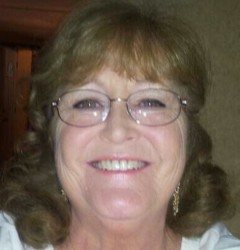 Pat passed away on Monday, October 26, 2015 at her residence.  She was born on October 17, 1946 in West Helena, Arkansas, the daughter of Robert Alvin and Frances Ladeahl (Keath) Brady.  She was married to Tim Tolson for fifty-three years come this December 26th.  He survives.  She was a teacher.

She was preceded in death by her parents; daughter, Heather Tolson and sister, Dorothy Fagerland.