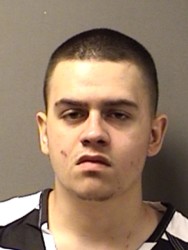 A 25-year old white male is dead from gunshot wounds following a Sunday night shootout on Ingram Street in Sulphur Springs. A 19-year old white male is in custody at Hopkins County jail awaiting a magistrate’s hearing to be charged with murder Monday morning, according to Justice of the Peace B. J. Teer. Teer pronounced the victim of the shooting dead Sunday night at Hopkins County Memorial Hospital ER.

Sanders stated that witnesses at the scene reported a white male having left the scene. During questioning, an individual who had arrived at the scene informed officers that a man was behind a building near Dairy Queen on Main Street and wanted to give himself up. Officers arrested Justin Joe McQueen. McQueen had injuries to his knees from jumping a fence. He was taken to HCMH ER where he was treated and released to Hopkins County Jail.