Local Man Found Guilty of Retaliation Against a Public Servant 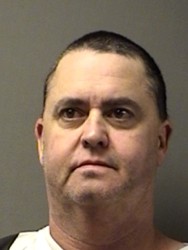 Tuesday afternoon an 8th Judicial District Court jury found John Todd Folmar guilty of Retaliation against a Public Servant. Folmar was on trial for threatening to kill Hopkins County Chief Criminal Investigator Lewis Tatum. Assistant District Attorney Clay Harrison presented a voicemail of the threat in which the defendant had identified himself by name during the trial. The trial began Monday morning and went to jury at 2:30 p.m. Monday.

Folmar was previously convicted of Aggravated Assault with a Deadly Weapon and placed on probation in the mid-90’s. That probation was revoked and he was sentenced to (4) four years in prison.

Sentencing for the current offense will occur October 29th before Judge Eddie Northcutt. Range of punishment for the offense is two (2) to 20 years in prison. Probation is also an option.