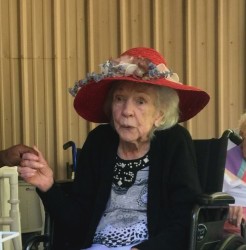 Jessie passed away on Monday, October 5, 2015 at Marion Place in Carthage.  She was born on March 13, 1919 in New Boston, the daughter of Effinger and Lily Mae (Turner) Gulley.  She married Roy F. Johnson, Sr.  He preceded her in death in 1991.  She was a retired LVN; member of New Hope Baptist Church in Gary and a member of the Order of Eastern Star.

She is survived by her son, Frankie Johnson of Carthage and Terry A. Johnson of Weslaco; daughter, Effie Loretta Fox; brother, David Gulley of Sulphur Springs; seven grandchildren and twelve great-grandchildren.

She was preceded in death by her parents.