Animal of the Week: Janis Joplin

Janis Joplin is a one to two year old Pocket Pit Bull. Her name came after the Animal Shelter Officers took note of her ” punk rock star” look. She was found running loose on I-30 at Broadway ST and taken to the Animal Shelter on October 1. She was found with a pink collar around her neck and she has yet to be claimed by anyone. She has tested negative for heartworms.

“She hasn’t had any obediance training,” Animal Shelter Officer Barbi Blanch said. “She’s really shy at first but she gets along well with other dogs. Both of our dogs have played with her.”

Despite her lack of obediance training, Janis has shown signs of basic potty training. Janis’s shy behavior exhibits signs of possible abuse, or perhaps living on her own for some time, according to Officers DeWolfe and Blanch. 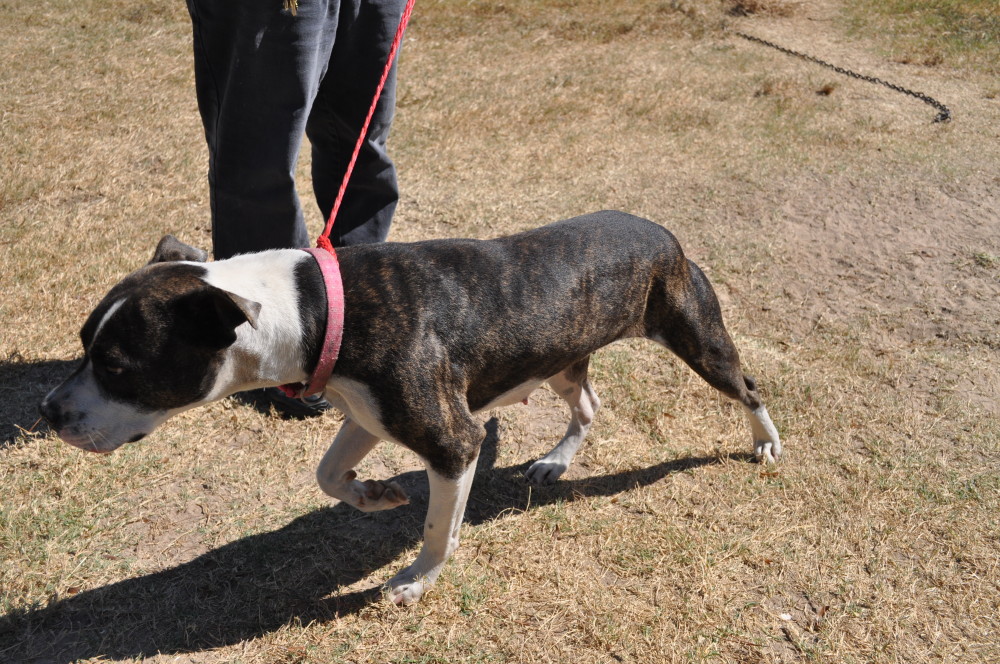 “I believe that a Pit Bull is going to be whatever you want it to be,” Officer DeWolfe said. “If you want a fighting dog, they want to please you, so that’s what they’re going to try to do. If you want a happy-go-lucky family dog that is just going to love you and play around all day, they will do that happily. They want to please. They want to be your friend, and unfortunately we have people out there that want to take advantage of that.”

Both Shelter Officers seldom have negative interactions with Pit Bulls. Officer Blanch can recall one instance in which she encountered an aggressive Pit Bull.

“In a lot of cases, it’s a fighting scenario, and sometimes it’s the way they were treated,” Officer Blanch said. “We did pick up one that the owners left and it was not a friendly dog at all. There was nothing we could do for her. She was in the back[of the shelter] and as soon as you opened the door you could hear her growling. That’s the only one in the time I’ve been here that has turned out like that. She had lived on a chain, because I saw the big chain in the back. They had released her from her chain and left her there.”

Regardless of the few aggressive encounters, both officers think of Pit Bulls as loving, kind, and playful animals.

“I had one sit in my lap and I think that’s the only one that has come close to killing me,” Officer DeWolfe said. “She just sat in my lap and probably about suffocated me with love.”