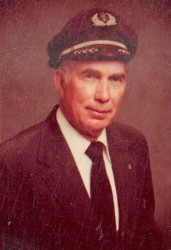 Funeral services for Alve James “Jim” Harty, age 93, of Yantis will be conducted at 2:00 p.m., Saturday, October 24, 2015 at West Oaks Funeral Home Chapel with Jerry Gilliland officiating.  Visitation will be from 1:00 to 2:00 p.m., one hour prior to service time.  Interment will be at the Dallas/Ft. Worth National Cemetery at a later date.  Jim passed away Tuesday, October 20, 2015 at Carriage House Manor.

Jim was born on January 6, 1922 in Tilton, AR, the son of Alfred Harty and Nora McKenzie Harty, and grew in Drumright, OK.  He married Toby McDowell Rives on January 6, 1996 and she survives.  Jim was a Captain for American Airlines from 1951 to 1982.  He served in the Army Air Corp during WWII.  He was a member of the Grey Eagles, he served on the Wood County Airport Board from 1997 to 2008.  He also was a member of the Revconeers of Family Motor Coach Association.

In addition to his wife he is survived by sons, A. J. Harty and wife Cindy of McKinney, Jon Harty and wife Melissa of The Woodlands, daughters, Janice Colisimo and husband Jerry of Hewitt, Jennifer Harty of Los Angeles, CA, Brenda Smith and husband Larry of Austin, Karen Knoll of Denver, Co, step-sons, John Rives and wife Lawren of Dallas, Sam Rives, Jr., and wife Meshelle of Manor, step-daughters, Kaye Gross and husband Jan of Denton and Missy King and husband Ed of College Station, and many grandchildren and great-grandchildren.

He was preceded in death by his parents, former wife Corinne, son, Jimmy Lee Harty, one brother and one sister.

Memorials may be made to the North Texas Projects Healing Waters, www.projecthealingwaters.org, American Heart Association, Ducks Unlimited or to a charity of choice.