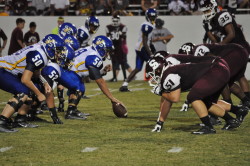 Sulphur Springs High School Head Football Coach and Athletic Director Greg Owens announced Thursday that due to a transcript discrepancy, the Wildcats’ football team played an ineligible player on September 4 at Sherman. He added the UIL had been notified and said the Wildcats will forfeit the Sherman game that the Wildcats won 20-17. The Wildcats season record will go to 0-3. Coach Owens said he took full responsibility for the oversight.