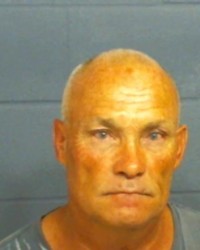 59-year old Harold Duane Fleming of Powderly was arrested Tuesday and was charged with stealing 10 head of heifers from a northeast Lamar County rancher. The cattle were valued at $11,000.  Texas and Southwestern Cattle Raisers Special Ranger Toney Hurley led the investigation.

“This case is a perfect example of how important it is for ranchers to brand their cattle,” said Hurley. “All 10 of the stolen heifers were identified and located because they had a brand on their hip. I encourage all ranchers to follow this precaution and keep a close watch on their cattle, especially when they are being held in a pen.”

Two of the stolen heifers were found running loose on the roadway with abrasions and cuts, suggesting they possibly escaped from a moving trailer a short distance from the rancher’s pens.

The investigation revealed that two of the stolen cattle had been checked into the Hugo Livestock Market Inc. sale barn in Hugo, Okla. on Sept. 11 under Fleming’s name. The victim identified the heifers with his brand and photographs of the cattle taken by Hurley.

Fleming is currently in the Lamar County Jail on a $50,000 bond.