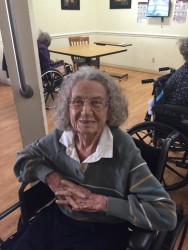 Mrs. Jones passed away Thursday, September 24, 2015 at Chandler Nursing Home.  She was born on July 9, 1925 in Posey, the daughter of Luther Pete and Josie Bell Dixon.  She married Max V. Jones on February 17, 1974 in Gregg County.  He preceded her in death in 1990.  She was a retired waitress, was a long standing member of the American Legion Auxiliary Post #12 of Tyler and of the Baptist faith.