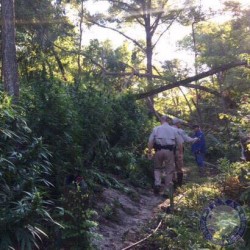 Some hunters in the Cooper Lake Wildlife Management Area in Delta County discovered a large marijuana farm Saturday. They alerted game wardens. The farm contained an estimated 6,000 marijuana plants with a street value estimated at between $5,000,000 and $6,000,000. It is believed that four suspects may have been tending the farm. They remain at large at last report. Lee Glenn, a Hopkins County Jail employee who oversees inmate labor, took a crew to the site Monday to help spray the plants with poison. 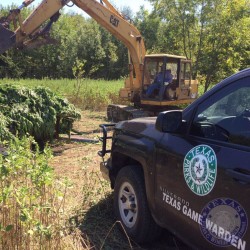