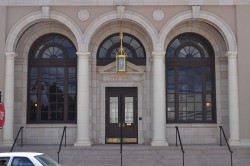 The Sulphur Springs City Council passed key ordinances on first reading for the budget for next fiscal year at a regular meeting Tuesday night. Mayor Kayla Price explains what the ordinances deals with and then there are responses from city Director of Finance Peter Karstens on the first three and then from city Human Resources Director Gordon Frazier on the fourth one. Councilman Craig Johnson also asks some questions.

The ordinances for the budget are expected to be finalized on second reading at a special meeting on September 29.

STREETS, WATER AND SEWER – The Davis Street wateriine replacement project is nearly complete. I expect it to be finished by Friday. After the water main is finished we will prepare the street for asphalt repaying in the summer paving program. This project replaces 1, 500 feet of water main on North Davis from Park to Glover.

The annual summer paving program is about to kick off. Texana Land and Asphalt anticipates paving the following streets this month:

The Rockdale Road reconstruction project is underway. The water line installation is nearly complete. After that, the street will be reconstructed with reinforced concrete. You might recall that in the past five years we have replaced two out of four segments of Rockdale Road (on the north side of the interstate). This project will reconstruct the remainder of Rockdale Road.

Bill Bradford Road is on-deck. At an estimated cost of $1. 4 million, this is a major project. It will include a new water main, a new sewer main, drainage improvements and a new asphalt

CLAIMS – We did not have any worker’s compensation claims in August. We had one liability claim in August relating to the death of Tony Chance Ross. We have submitted it to the TML risk pool. We submitted a claim to TML for damage at the water treatment plant from a recent lightning strike.

REVENUES AND EXPENDITURES – Finance Director, Peter Karstens will present the year-to-date summary of revenues and expenditures.

. Painted crosswalks and school zone lines at all schools.

. Trimmed trees that were blocking the view of signs in all school zones.

. Cleaned up crash site at the airport.

. Fertilized all grass and trees downtown.

. Removed the stains from vandalism on the Hopkins County Veterans Memorial.

. Repaired the beacon light at the airport.

. Performed preventative maintenance on numerous items at the wastewater treatment

Achieved a 40% adoption rate at the animal shelter.

Made 4 felony arrests in the special crimes unit.

Checked out 3,641 materials from the library.