The large pavilion project at Buford Park may be delayed for months according to City Manager Marc Maxwell. Maxwell told  KSST News that the city was expecting to receive this week the laminated beams which would serve as support for the pavilion roof would not be received any time soon due to the closure of Arkansas Laminating. He called the beams a critical component for the structure being built by the city with local business donations and the fundraising efforts of the Hopkins County Chamber of Commerce Leadership Class. The pavilion will occupy the location formerly occupied by the city swimming pool.

The city became aware that the beams would not be available when a phone call was placed to the manufacturer to confirm delivery this week. The city is now searching for another manufacturer. Maxwell stated the city is ready to pour the slab for the pavillion but a different manufacturer may need to build for a different sized slab. Work has been halted until a new supplier is found.

Maxwell said a bank had padlocked the location of the manufacturer. 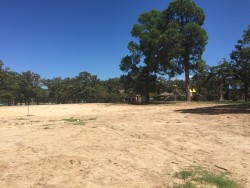 On September 9th the MagnoliaReporter.com updated a September 3rd posted article regarding the closing of Arkansas Laminating. In the article, it is stated that “Arkansas Laminating – the former Unit Structures – is closing after three years of operation. About 50 people will lose their jobs at the company on Shanhouse Drive.”

Magnolia attorney David Butler, one of the owners of ArkLam, confirmed the pending closure in a brief email to magnoliareporter.com .

There was no immediate word on any sale of the business to a new owner or on the disposition of its equipment.

ArkLam or Unit Structures laminated beams are found in office buildings, barns, schools, churches, parks and many other locations across the United States. One of its most famous installations is at the Crystal Bridges Museum of American Art in Bentonville. A recent installation included 12 105-foot-long beams for the Urschel pavilion at Central Park in Valparaiso, IN.

Arkansas Laminating was assisted in the transaction by lawyer Ronny J. Bell, of Bell & Boyd, P. A. Arkansas Laminating’s purchase of the manufacturing plant real estate was facilitated by Farmers Bank & Trust, Magnolia.

Shortly before the 2012 acquisition, magnoliareporter.com had reported that Unit Structures faced lawsuits from two different suppliers, who cited unpaid debts dating back to the middle part of 2011. The company’s history in Magnolia dates back to the 1950s and it has seen several owners.

The new company received a considerable amount of local and state aid to help it get on its feet.

Arkansas Laminating received a $380,000 grant from the State of Arkansas for new equipment and roof replacement. The Magnolia Economic Development Corporation contributed $35,000 toward the purchase of an air compressor.

Burley, who was active in the management of the former Unit Structures, is the chief executive officer.