September 30, 2015 – Shelton Brooks, the new Chief Administrative Officer for Memorial Clinic attended his first meeting of the Hopkins County Memorial Hospital Board Monday night.  He’s in his second week on the job.  He is replacing Mike Yost.  Brooks has had a 20 year career in health care in Florida.  He comes from Jacksonville, FL.  His wife is said to be a die hard Cowboys fan.  Brooks caught some good natured grief for being an Atlanta Falcons fan. 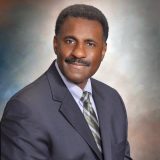 Brooks stated that he is becoming acquainted with staff and procedures by making rounds for 45 minutes. He is also meeting city and civic leaders locally. Praising the work of Yost, Brooks intends to continue the good work.

Calling himself detailed, organized, and a good listener, he stated he is committed to the best care for the community.