Bond Set for Aggravated Assualt with a Deadly Weapon Arrest 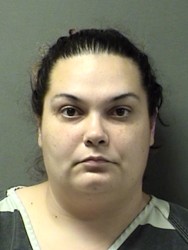 Wednesday morning, Justice of the Peace B. J. Teer set bond at $75,000 for 33-year old Miranda Marie Bazaldua of Sulphur Springs. Bazaldua was arrested Sunday night just after 10:30 p.m. after she reportedly threatened her mother with a knife. Hopkins County Sheriff’s Sgt. Wade Sheets and Deputy Shea Shaw were sent to investigate a case of aggravated assault with a deadly weapon. When they arrived, a woman said her boyfriend had assaulted her. He denied it and others present agreed with him. The woman finally admitted she had argued with her mother, had threatened her with a knife and had stabbed the knife into a wall several times.