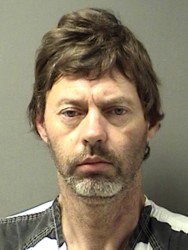 Joseph Thomas Tucker, 46, appeared for sentencing at Hopkins County Courthouse 8th Judicial District Court Wednesday. He was to be sentenced on charges for possession of a controlled substance over 200 grams but less than 400 grams. Tucker decided not to wait. According to District Attorney Will Ramsey, Tucker “decided he didn’t want to go to prison and just left.”

Tucker was apprehended in Franklin County. He is now in Hopkins County jail held on $100,000 bond forfeiture for the possession charge.