Where is the Enola Gay today?

Home » Headlines » Where is the Enola Gay today?

August 6, 2015 is the 70th anniversary of the atomic bombing of Hiroshima, Japan in the final stages of WW II. It’s historic because it was the first time an atomic weapon was used in combat. The plane which carried the bomb was Boeing B-29 ‘Enola Gay’.  The pilot was Paul Tibbetts and co-pilot was Robert Lewis. Two other B-29’s also went on the mission to photograph the dropping of the bomb. No one knew exactly what to expect. The pair in the cockpit forgot to put on their sunshades and thus experienced the brilliant flash. The crew did not know what the impact would feel like either, exactly. The co-pilot’s notes to the log reveal there were a couple of “slaps” to the plane in the aftermath of the explosion, and as they banked away, they looked back and could see only smoke and the rising mushroom cloud. Lewis noted, “My God, what have we done?” Three days later, a second bomber carried our message to Japan at Nagasaki aboard the plane “Bock’s Car”, with Enola Gay sharing the mission as advance weather reconnaissance. After this second blow, Japan surrendered and subsequently, the war came to an end. 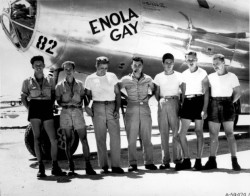 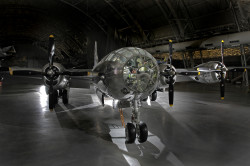 Where is the Enola Gay today? At first, only the nose section of the plane was on display at the Smithsonian Museum, however you can now view the fully restored, polished aluminum super-fortress on a gleaming hangar floor at the National Air and Space Museum in Virginia. 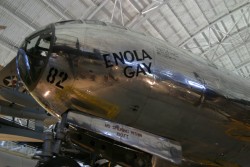 Many people already know that the famous plane was named for the pilot’s mother, Enola Gay Tibbetts. A generation earlier, a novel was written by Mary Young Ridenbaugh and published in 1886 as “Enola: or Her Fatal Mistake”. Mrs. Tibbetts was named for the central character. Curiously, the opening poem and other passages from the book refer to horrors coming from above and destruction from the skies. Some 59 years before the first atomic attack, was this writing cryptic of the future world?