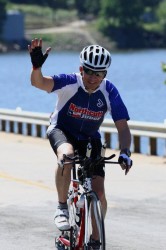 Due to the fact that 8th Judicial District Judge Eddie Northcutt had no broken bones and did not require surgery and a full slate of surgery patients for the local orthopedic doctor, Judge Northcutt will undergo an MRI Tuesday afternoon. Sunday afternoon 5:24 p.m.  8th Judicial District Judge Eddie Northcutt was struck by a vehicle on State Highway 11 East, 2 miles East of Walmart, according to the Hopkins County Sheriff’s office. Northcutt was on a bicycle when he sustained injury. The injuries are not life threatening. He was taken by EMS from the scene of the accident to Hopkins County Memorial Hospital. He was later released with bruises but no broken bones. The accident is being investigated by the Department of Public Safety.
In a phone call from Mrs. Northcutt in response to KSST Morning Show Host Enola Mathews, Mrs. Northcutt said her husband Judge Eddie Northcutt is doing fairly well, but is awfully sore. His left leg is unable to bear weight, his left knee is painful and his left ankle is swollen. he has bruises and a little road rash. According to Mrs. Northcutt  when the truck hit him, he was catapulted onto the grassy ditch which helped cushion his fall. Interestingly, his bike was not crushed or even bent. The only damage was a broken hand brake.