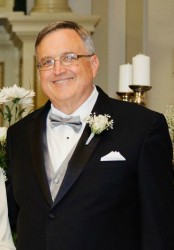 A service to celebrate the life of Stephen Longino Bonner, 63, will be held at 2:00 p.m. Wed. at First Baptist Church, with the Reverend Dr. David Hardage officiating. The family will receive visitors from 6 – 8 p.m. Tues. at West Oaks Funeral Home.

“Bubba” was born in Sulphur Springs, Texas, to Lou Jane Longino Bonner and Daniel Edwin Bonner. He was the grandson of D. R. and Naomi Addams Bonner and Dr. S. Byrd and Una Lou Carothers Longino. He married Catherine Cobb Brandon on March 18, 1978.

Stephen graduated from Sulphur Springs High School in 1970. He served as president of the National Honor Society and was a three-year letterman of the Wildcat football team. He also attained the rank of Eagle Scout. In 1974 he graduated from Vanderbilt University, where he was a member of the Phi Kappa Psi national fraternity. He began his business career as a wholesale hardware salesman, following in the footsteps of his father and grandfather. As he traveled the roads of East Texas, he developed lasting friendships with his customers. Upon completion of his hardware career, he followed his first love of teaching as a special education teacher in the Cooper ISD.

Stephen enjoyed a lifelong love of sports and had a wealth of trivia readily available for discussion with his many friends. He served on the selection committee for the Wildcat Hall of Honor.

He loved his community and served as a city council member beginning in 1981, including time as mayor. Following his time in city government, he served on the board of directors of Hopkins County Memorial Hospital. He was a member of the Rotary Club and a Paul Harris Fellow.