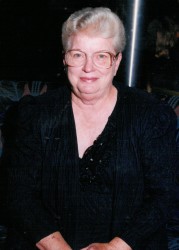 Ms. Evans passed away on Tuesday, August 18, 2015 at her residence.  She was born on July 21, 1935, the daughter of Hughey and Gladys (Jones) Davis in Commerce.  She was a retired program manager at the USDA and a member of Riley Grove Congregational Methodist Church in Commerce.

Survivors include her son, Linton Ray Evans and wife, May of Greenville; daughter, Diana Evans McGrath, and husband, Paul of Melbourne, Australia; son, Michael Evans and wife, Rebecca of Verona, VA; daughter, Peggy Evans Anderson and husband, Robert of Cumby; grandchildren, Thomas Evans of Portland, OR, Bobby Anderson of Cumby, Lindsay Evans of Greenville, Kirah McGrath and Samuel McGrath, both of Melbourne, Australia, Heather Constantinople of Connecticut, Arvin Datu and Armaine Datu Anticeto, both of Greenville and Francisco Aisporna, stationed in South Korea and one great-grandchild.

She was preceded in death by her parents; brother, Kenneth Davis and her grandson Christian Evans.