You may remember the old story about the teacher that had her elementary class draw a picture about Christmas. Several drew Santa Claus and others portrayed Nativity scenes. One little boy had baby Jesus, the donkey, Joseph, Mary, the manger and sheep. The teacher was really bragging on his art work but had a question about a little fat man off to one side. She asked about the little fat man and the boy told her it was “Round John Virgin.” At times young people don’t understand the words to things such as a song, poem, national anthem, or pledge to allegiance. They just fill in with what they think the song leader is saying. Back to our main theme in a while. Now let’s make a fast trip to the Sulphur Springs Square.

A few weeks ago we went to Sulphur Springs to a concert by Tom Glosup, Brad Davis, and a few more. Jean spotted a little birdhouse looking thing just north of the stage. She can spot those bird houses. About four feet off the ground. Actually a little big for a birdhouse unless it was maybe a martin box. Might have been big enough for a family of Chihuahuas, if they could jump that high to get in it. As we approached the strange box we could see books inside. It was like a little library. You bring a book and swap it for another. As I glanced over the titles there was one caught my eye. The title on this 1980 book is On Language by William Safire, a writer for the New York Times. His column receives quite a bit of feedback since he is adept at fanning the flames on various subjects.

One of his articles referred to kids using wrong words or phrases in poems, songs, etc. A teacher listened carefully to a little girl and heard her saying, “I pledge allegiance to the flag and to the republic for Richard Stans.” Other renditions of the pledge are “One nation, under guard, I pledge a legion to the flag, I led the pigeons to the flag.” The list goes on and on such as the following: one naked individual, one nation in a dirigible, and one nation and a vegetable. Mix ups are not limited to the Pledge of Allegiance. Here are some from our National Anthem: The Donzerly light, Oh the ramrods we washed, grapefruit through the night. Let’s don’t leave out the 23rd Psalms and Shirley Murphy. Shirley, good Mrs. Murphy shall follow me all the days of my life. Surely goodness and mercy would not lead me into Penn Station. There’s more: Through the night with a light from a bulb, I will follow Henry Joyce (instead of I will follow and rejoice.)

Many young ones first think the alphabet shifts from individual letters to the word “ellemeno” in one place. I thought of the following years ago and have it in one of my columns. Meteorologists rattle off “patchy fog” without considering hundreds of people out there are wondering what is “Apache fog.” Another misunderstood phrase is “the pullet surprise.” And don’t forget, double, double, toilet trouble. Well, as Mr. Safire says to end his article, “A nuff is a nuff.”

Sometimes I ask for help with a problem. Glen Stone emailed me recently and asked why 2716, the road that connects the “country club road” with Highway 24, is called Smokey Road. I had never thought of that before. Thomas Peters is 89 years old and said it had been called that ever since he was a little boy. Some thought the Echols Family might know or Curtis Walker since they have lived there for many years. I looked in the phone book for Edwin Slough but there is no listing. If any of you know how Smoky Road got its name please email me or call 903 439 8110.

Don’t forget the Friends of Doctors Creek Annual Fish Fry at the First Baptist Church on Saturday, August 22. We will serve from 5:00-7:00 p.m. Money from this event is used to help keep Doctors Creek Park “alive” by providing things like the fishing pier in the boat ramp cove. Many crappie have been caught there over the years. One of our projects for the future is to upgrade some of the screened in shelters by adding central heat and other improvements. The more people that visit the park increases the chances that the park will not be closed. We encourage new members/visitors to join us

on the second Tuesday of each month at 6:30 at the Chamber of Commerce on the west side of the Cooper Square.

I talked to David Nabors recently at the Charleston Homecoming about the proposed Marvin Nichols Lake. David and Sharon keep all us locals posted on developments. Compared to Cooper Lake with about 19,000 acres, the new lake would contain 77,000. David said things are sorta at a standstill now because of so many environmental issues. There are over 700 oil wells and many are not sufficiently capped. There is also not enough land for wildlife around the outside edges. Thanks, David and send news (text, email, or phone) on new developments. I hope I got the facts straight. It was pretty noisy in the community center with all the visiting and sharing old memories.

Congratulations to granddaughter Baylie, and Tyler, on the birth of their daughter, Chandler Leeann, on August 12. Yes, that makes Jean and me great, great grandparents.

A woman was pulling weeds out of the yard one afternoon and her husband hollered from the porch, “What’s for supper?” She got mad and hollered back that she was working and he could just fix his own supper. Just pretend she was gone somewhere. He went in the kitchen, fixed a big salad, grilled a big steak, and baked a potato. The wife came in just as he finished and asked where her supper was. He said, “I thought you were gone.” 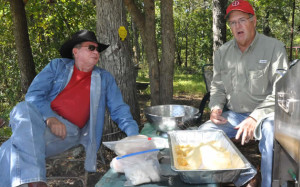