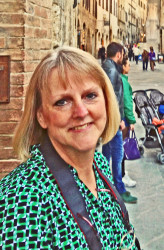 Silver Leos Writers Guild will host its September meeting on Wednesday, September 9th, from 1-4:30 p.m. September’s guest speaker will be Heather Karstens, a Sulphur Springs artist and illustrator.  Her topic will be “The Art of Illustrating Children’s Literature” in which she will illumine how an author finds an illustrator, the costs involved, and how the collaborative team works. A Q&A session will follow her presentation.

Karstens has been drawing since elementary school when she won a “Keep California Green” contest competing against students from a three-state area plus British Columbia, no small feat for a third grader.  Later, Karstens studied art at BYU under an art scholarship; however, she credits her high school art teacher, Arlan Welch, with teaching her passion as an artist and as the one person who inspired her the most.

Karstens’s diverse art experience spans over 45 years and covers a multitude of art areas.  She has worked as a graphics artist, a paste-up artist, a cartoon cell painter, art director for a T-shirt painting business, as well as a sign painter for ten years.  Karstens has painted and sold over 300 portraits and currently teaches private art lessons from the studio in her home.  She paints in all mediums and is currently working on an oil painting from a photo of the ruins of the Greek city Pergamum in Southwest Turkey.  She enjoys painting sights she and her husband have seen while traveling together.

Feldt has recently created a new character who will be featured in a series of stories.  The character is a resourceful, clever, and energetic nine year-old girl named Sarah O’Shea who has a head full of wild and crazy red hair that has a mind of its own.  Feldt needed a new illustrator since Abbott Press, the original publisher of The Stable, is no longer handling children’s books.

As serendipity would have it, Kartstens and Feldt met by way of Feldt’s hairdresser last February.  They discussed Feldt’s second book over lunch, and Karstens submitted several sketches of her ideas about how the story should be illustrated.  Feldt was immediately enamored, and the two have been collaborating ever since.  The first book in Feldt’s and Karstens’s new series, The Scary Hair of Sarah O’Shea , will be released in the next several weeks through Life Rich Publishing.  The newest installment of Sarah’s adventures, Sarah O’Shea and the Wacky Faucet, is still in process.  Hang on to your hats; the collaborative team of Feldt and Karstens have unleashed the adventures of the soon-to-be-a-favorite, Sarah O’Shea!

Silver Leos Writers Guild is a chapter of TAMU-C Alumni Association.  Annual dues are $20. Refreshments will be served from 1:00 to 1:30. Peer critiques of member submissions will begin at 1:30 and will be followed by the guest speaker. The Guild meets on the second Wednesday of each month in the Alumni Center at TAMU-Commerce on the west side of the campus.  Those interested in honing their craft of writing, whether novices, professionals, or anywhere in between, are welcome.  For more information, please call Bobbie Purdy at 903-886-6120 or Vivian Freeman at 903-886-8953, or you may email them at [email protected] or [email protected]. Please see also http://silverleos.net.