On July 2, 1994, at what was then called Heritage Square, now called Celebration Plaza, Alma Ellison handed to KSST’s Bill Bradford a handwritten note that included a summary of a story told by her father, Paul Braden. At age 99, Mr. Braden had told how as a teenager he had watched the building of the Hopkins County Courthouse in 1895. Copies of the 1994 letter by Alma Ellison are now kept in Judge Newsome’s office in the courthouse. 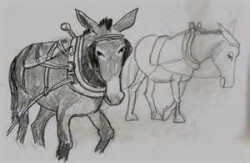 Here is the contents of her note and the of the recorded transcription: “I am Alma Ellison and I live in Winnsboro. My father was Paul Braden who lived in Hopkins County most of his 103 years. He died in 1985 just a few days before his 104th birthday. He was born in 1881 and told me a story on tape on his 99th birthday about how he stood as a teenager across the (Sulphur Springs) square and watched as this beautiful old courthouse was built. When the groundwork was finished and the scaffolding couldn’t reach any higher, there were two (black) men who worked with a mule named Pete. The men put the sandstone blocks on a board and when they were ready to hoist the block, they would say “go up, Pete” and Pete would start walking out, and the ropes would raise the block up to the stone mason who had the mud on his trowel and was waiting for the block. old Pete would go out just far enough that the block would be set right down on the spot where the mason wanted it. I asked what command was given to the mule to have him back up. He said there was no command; old Pete just knew what to do. That routine was continued until every stone was in place. He, my dad, tired of talking to me on tape, and so he finished by saying ‘that is a good old courthouse and I want it to stay there’. Thanks to all of you for keeping in good repair this ‘beautiful old courthouse’.”