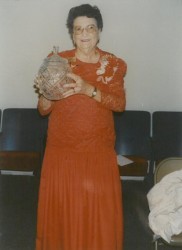 Mrs. Yarbrough passed away Wednesday, August 12, 2015, at East Texas Medical Center in Quitman.  She was born on July 20, 1920 in Yantis, the daughter of Ruben and Artie Lee (Wright) Stephens.  She married Lawrence “Pard” Christian, who preceded her in death.  She then married Roy Yarbrough, who also preceded her in death.  She was a member of the Order of Eastern Star as a past worthy matron and a member of the County Line Baptist Church.

She was preceded in death by her parents; both husbands; one daughter, Ima Lou McCoy and three brothers, Gail Stephens, Johnnie Stephens and Elizie Stephens.

Memorials can be made to the County Line Baptist Church in Yantis.