Last week I asked for information about Smoky, or Smokey, Road. Why was it given the name? It’s FM 2716 that cuts across from the Country Club Road, 1529, over to Highway 24. Up about Walker and Echols country. Thomas Peters said he thought it was because it used to be a lot of small farms up that road. Lots of little houses beside the road. They all burned firewood and therefore the road was very smoky. Judge Jason Murray reports seeing an old picture somewhere years ago of the road covered with smoke. This past week I got a letter from Elizabeth Echols and she sent some more information. Here is her letter as she sent it.
“A few years back at an event our family was attending, possibly the Enloe Homecoming, some people started talking about where the name came from. If memory serves me, I remember one fella saying it was named Smoky Road because of the smoke that billowed out from potbelly stoves of sharecroppers that that lived along that area.
Another point of interest about Smoky Road is the spelling. My grandparents had an entry way put up on their place 25 years ago that reads Smoky Road Ranch. My grandparents had a little bit of debate about the proper spelling of ‘smoky’, with my grandmother, Ruth Echols, winning out. I remember hearing a guy mention a couple of years ago that it was spelled wrong. I have always prided myself on being a pretty good speller and my grandmother wouldn’t have spelled it wrong, but I went to the dictionary to verify. As I thought, there is no E in the word, smoky, when referring to something to do with smoke/fire. The only references I have seen that refer to smokey with an E is if you are talking about a highway patrolman/ policeman, or smokey the bear. Not sure why they are spelled differently, maybe you can investigate that for another story.
Just wanted to share with you the little bit I had heard about Smoky Road. I’ll get ahold of my Aunt Linda sometime and see if she knows anymore.” Thanks Elizabeth for the information.
Return of the coatimundi. In 2010 Jean was coming home around the Charleston South Loop when she saw a strange creature. After she described it I told her it was either a ring tail cat or a coatimundi. After looking at pictures she said it was a coatimundi. About a week later she saw it again and got a lot better look at it. Dan Pickering and Tommy Anderson were working on our new house and Jean described the critter to them. Tommy said some exotic animals had recently escaped over in Hopkins County. This past week daughter in law Jinger was walking in the west end of Charleston at McGuyer Branch. A critter came out from under the bridge and she got a good, close look at it. From her description the coatimundi is still in our area. Watch for an animal with a long tail carried upright with a sharp curl at the top.
Years ago each August just before school started I would go on a last minute float trip. Sometimes by myself and sometimes others went along. Almost to the day, 27 years ago I made such a float trip. Let’s go back to 1988 and have a semi adventure. Monday, August 15, 1988. Left home about noon and crossed at Kensing Crossing. Through Cunningham and stopped to talk with Taylor Ladd who was sitting under a shade tree on his curve by his junkyard. Taylor told me about his grandson killing a wild hog with a bow. Cunningham store owner Johnny Musgrove said the hog was on his land and filed charges and took the hog. Taylor said Johnny was “cutting a big hog,” a saying I had never heard before referring to when somebody is trying to act big and show out. Leaving Taylor’s I drove on toward Clarksville then Dekalb where I was going to launch my boat.
Stopped in Clarksville to get gas at a station run by a man named Ballentine. Did his practice teaching at Sulphur Springs with Dan Pickering. Taught at Del City with Vincent Lum, brother of our county agent Eric Lum. On to Dekalb and stopped at a Phillips 66 station. Paid a high school senior five dollars to go to the river and help me launch my boat. Talked to Jack Duncan that had some cattle missing and thought they were bogged down in the river. Gave me his phone number and asked me to watch for them. On the river at 4:40. At 6:10 there was a four wheel drive John Deere near the edge of the bank. A fishing camp with live boxes to keep fish in. White jugs marking trotlines. By 6:30 at the north end of a long straight stretch. Big tires on the Oklahoma side used to try to slow erosion. 6:55 hundreds of bank swallows.7:07 a kingfisher just dived into the water after a fish. 7:09 a huge fish of some kind was laying just underneath the water and I scared it. Made a big splash. Had to weigh over fifty or sixty pounds. To be continued.
Things to consider: No one says “It’s only a game when their team is winning.” Some people spend money on beer and lottery tickets then complain about not feeling good and being broke. Why is it that most nudists are people you wouldn’t want to see naked anyway. Snowmen fall from Heaven—unassembled. I signed up for an exercise class and they told me to wear loose fitting clothes. If I had any loose fitting clothes I wouldn’t need an exercise class.
[email protected] 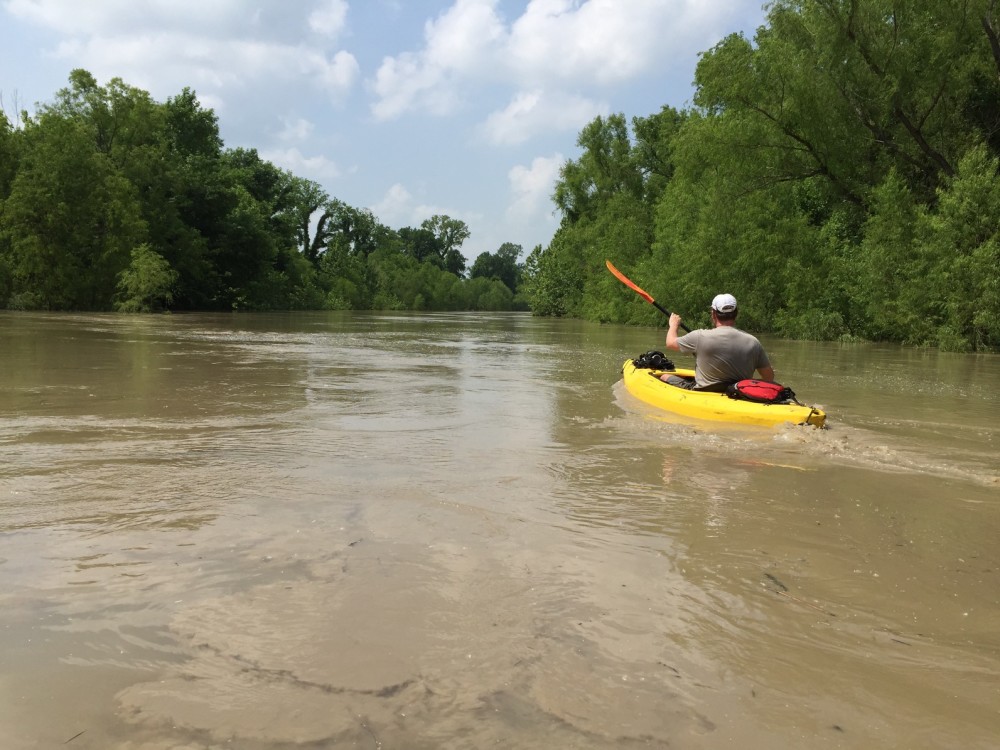