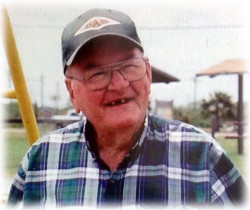 Wesley “Buddy” Manning McMahan left his earthy vessel and went to be with the Lord on July 6, 2015. He was born in Dike, Texas on November 1, 1926 to Walter and Rebecca McMahan.

Buddy married Eva Nell Joslin on July 6, 1953 which blessed them with two children, three granddaughters, and five great-grandchildren. Buddy served in the Army during WWII. He was a member of IOOF #77 for several years serving as Vice Grand and Vice Noble Grand. He was a long time member and Deacon of Community Bible Fellowship of Dike. He retired from E-Systems where he worked as an aircraft electrician at 62, but that did not slow him down. He was always working on something and could do just about anything.

He was preceded in death by his parents, Walter & Rebecca; an infant brother; his sisters, Rachel Tatum and Aleene Marshal.

There will be a farewell service and fellowship at 2 pm on Friday, July 10 at Community Bible Fellowship of Dike.