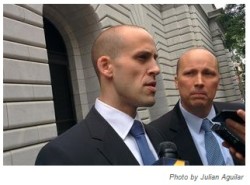 Attorneys for the Obama administration will try again on Friday to persuade a three-judge panel of the U.S. 5th Circuit Court of Appeals in New Orleans to let a controversial immigration policy take effect.

But supporters of the program, which would have shielded the bulk of Texas’ 1.6 million undocumented immigrants from deportation, aren’t optimistic. That’s because two of the three judges selected to hear this week’s arguments already weighed in once — refusing in May to overrule Brownsville-based federal judge Andrew Hanen, who halted the president’s measure in February.

Obama’s immigration policy, announced in November and known as Deferred Action for Parents of Americans and Lawful Permanent Residents, or DAPA, would have allowed some 5 million undocumented immigrants nationwide to apply for a work permit if they passed background checks, steered clear of trouble and paid back taxes and fines.

In December, Gov. Greg Abbott — then the state’s attorney general — sued the Obama administration, arguing that the president had overstepped his authority by circumventing Congress and taking immigration reform matters into his own hands. Twenty-five other states have since joined the lawsuit against the federal government.

Current Attorney General Ken Paxton, whose office is now handling the case, said in a statement that he is confident Texas will go three for three in its legal battle with the White House over the immigration program.

“The Obama administration unilaterally rewrote the law, creating an amnesty program that will reward people who are here illegally with free government benefits,” Paxton said. “The district court rightly stopped this program in its tracks, and we will continue fighting President Obama’s disregard for the rule of law.”

Friday’s arguments come roughly three months after attorneys for the U.S. Justice Department asked the 5th Circuit Court to lift Hanen’s order, allowing the immigration measure to take effect while the issue played out in the courts. They argued then that the Texas-led coalition of states didn’t have standing to sue to block the program.

But Texas Solicitor General Scott Keller, who will be arguing on behalf of the state on Friday, has said Texas would suffer harm because it would have to educate and provide health care for the immigrants who remain here under Obama’s program. The state would also incur costs for having to issue some driver’s licenses, he has argued.

Attorneys for the state go in with the upper hand this week, considering the fact that two of the judges denied the Obama administration’s initial request in May. At the time, they ruled that “the [federal] government is unlikely to succeed on the merits of its appeal.”

Like they did ahead of the last set of arguments before the 5th Circuit, supporters of Obama’s plan will rally in New Orleans on Friday to draw attention to what they say is needed immigration reform. Mary Moreno, the communications director for the Texas Organizing Project, a group of activists who support the president’s initiative, said some 150 supporters from Texas will join forces with advocates from across the country.

“Our main objective in making the trip is t0 continue putting the blame for this delay where it belongs, with Gov. Abbott,” she said in an email. “He is responsible for keeping our families in danger of deportation and separation.”
This article originally appeared in The Texas Tribune at http://www.texastribune.org/2015/07/10/state-hopes-stay-undefeated-against-obama-immigrat/.