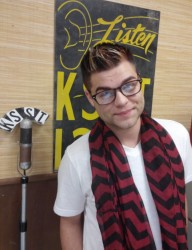 Home for the summer, Triston Pullen, a student at Santa Fe University of Art and Design, will be directing “A Streetcar Named Desire” to be staged at the Gospel Opry House, in six performances July 23-31. Evening performances will be at 7 p.m. and a matinee Sunday, July 26 is at 2 p.m. Proceeds from “Streetcar” will be used to fund a scholarship for a SSHS graduate in the drama department. Tickets in advance are $10 each and are available at Janeen’s Country Cottage or from Tristan at 903-335-1364. “A Streetcar Named Desire” contains adult content.

Pullen is an acting major with a minor in technical theatre with emphasis on direction. During his first year at Santa Fe, he acted in three (3) films and directed a play. He also had additional minor roles in various plays. In the Fall, he will work as an assistant director of a world premier play, “Almost Adults”.