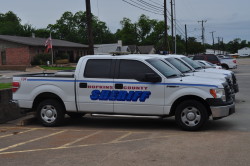 A 33-year old Emory woman was charged with seven offenses after a traffic stop just before midnight Thursday night. Hopkins County Deputy Shea Shaw stopped a vehicle on Highway 19 South at FM 1567 West. His arrest report indicates he saw a baggie of marijuana in plain site. The deputy also saw a woman attempt to destroy some crack cocaine in a bottle she had hidden on her person. The woman also claimed ownership of 1.74 grams of methamphetamine found in a pocket of a male in the vehicle.

At the jail, the woman was found to have .29 grams of methamphetamine on her person. The woman told the deputy she was not using the drugs but was just selling them. Sheila Ann Grimes had a magistrate’s hearing with Justice of the Peace Brad Cummings who charged her with seven crimes and set bonds totaling $65,000. Ms. Grimes was charged with two counts of possession of a controlled substance over 1 but less than four grams, one count of tampering with physical evidence, 3 counts of possession of a controlled substance less than 1 gram and one count of possession of a prohibitive substance in a correctional facility. One man in the car with the woman, a 39-year old Emory man, was fined $329 for a misdemeanor charge of possession of drug paraphernalia. A third person in the vehicle, a man, was not arrested.