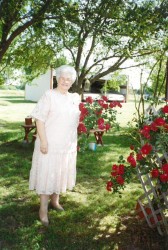 Private graveside services for Geneva Boggs, age 87 of Sulphur Springs will be held at Reilly Springs Cemetery.  Visitation will be held from 6:00 to 8:00 p.m., Wednesday, July 29, 2015 at Murray-Orwosky Funeral Home.

Geneva passed away on Monday, July 27, 2015 at Sulphur Springs Health and Rehab.  She was born on June 11, 1928 in Birthright, the daughter of Joseph and Ollie (Seymore) Pierce.  She married Bill Boggs in Oklahoma in 1972.  He preceded her in death.  She was a retired Dispatcher for the Hopkins County Sheriff’s Department and was of the Baptist faith.