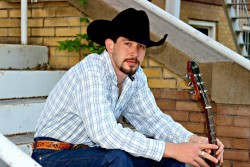 Gary Don Jones Jr. will be featured at the Reilly Springs Jamboree on Saturday July 18, 2015 with JW Kinkaid and the Hard Times Band. This is Gary’s first local appearance since his move to Nashville. Concert appearances in the Southeast, songwriting and recording a new CD have been keeping him busy.
However, back home in Northeast Texas during a week’s R and R, Gary agreed to appear on the historic Reilly Springs stage where he played along with his father numerous times as a teen.
Gary Don Jones Jr. received his first guitar at age 5 from his musician dad. Gary Sr. was employed by Ray Price for 27 years, and by Doug Kershaw before that. Growing up in that atmosphere, Gary got to meet the likes of Willie Nelson, Merle Haggard, Ray Benson and Kris Kristopherson. His friendship with Ray Price was something very special. Allowed to travel on weekends with the band as a youth, he treasures the memory of Ray asking him from the stage one night if he could be his “grandfather”. “Papa Price”, also known as “The Chief” (of the Cherokee Cowboys) was Gary’s musical mentor during the last years of his life. “Gary Jones and the Silver Spurs” was his high-school band which played around Wood, Franklin, Hopkins  and surrounding Texas counties.
Gary gravitated to Nashville in 2014, hired a manager and is cultivating a full-time career as a country musician and recording artist. You can keep up with Gary Don Jones Jr. on Facebook.
For details on the Jamboree concert, contact Enola Gay at903-438-3568.