Flynn Questions Legality of Same Sex-Marriage Under Texas Law; Ask What Federal Government Could Do if State Legislature Does Not Change Law

Home » Featured » Flynn Questions Legality of Same Sex-Marriage Under Texas Law; Ask What Federal Government Could Do if State Legislature Does Not Change Law 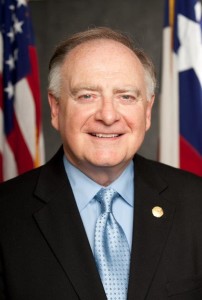 States rights questions remain even though the Civil War was thought to settle most. District 2 Texas State Representative Dan Flynn has requested an Attorney General’s opinion regarding the status of law pertaining to marriage in Texas. Among the questions regarding marriage, Flynn asked if current state law allows the issuance of marriage license without the Texas legislature changing the laws of the state. Specifically, he asked, “Without revision to Texas statute, are marriage licenses issued to same-sex individuals since June 26, 2015, valid?” His letter was sent to the AG last Thursday, according to Representative Flynn’s Austin office.

In a newletter to constituents, Representative Flynn stated that he was unsure if the U S Supreme Court had the right to override state law. Flynn questions, “In the event that the Texas legislature does not amend current law, what action could the federal government take to implement same-sex marriage?”

Below is the letter Representative Flynn sent to Texas Attorney General Ken Paxton as well as the arguments he presents that fostered the questions.

RE:      Request for attorney general opinion regarding status of law pertaining to marriage in Texas

I respectfully request that you provide this office with a formal written opinion regarding the following questions:

Please see the attached brief addressing the above referenced issues. Thank you for your time and consideration.

On June 26, 2015, the United States Supreme Court held in Obergefell v. Hodges that there is now a constitutional right to same-sex marriage. No. 14-556 (2015). Despite neither Texas nor any Texas official being a party to Obergefell, certain state agencies and local governmental officials raced to implement same-sex marriage, while Texas law remains unchanged. For example on the same date, the Texas Department of State Health Services (DSHS) unilaterally changed the state promulgated marriage license application to delete the blanks for “man” and “woman” in place of “applicant one” and “applicant two.” Compare http://www.kltv.com/story/29420782/texas-revises-marriage-license-applications-effective-immediately with https://docs.google.com/viewer?url=http://www.dshs.state.tx.us/vs/field/docs/vs180-(2)-fillable.pdf. The Travis County Clerk issued 250 marriage licenses. http://www.texastribune.org/2015/06/26/texas-same-sex-couples-begin-marry/

Does Any Interpretation of Texas Law Provide for Same-Sex Marriage?

No interpretation of existing Texas law results in allowance of same-sex marriage. Rather than Texas law prohibiting same-sex marriage, Texas law solely defines marriage “only as a union of one man and one woman.” Tex. Const. Art. I, §32. In terms of a formal marriage, the Texas Family Code provides the following:

the county clerk of any county of this state. (b) A license may not be issued for the marriage of persons of the same sex.” (emphasis added).

Judge Garcia ruled unconstitutional “any Texas law denying same-sex couples the right to marry.” Yet, even with the federal courts striking as unconstitutional Tex. Const. Art. I, §32, Tex. Fam. Code §§2.001(b), 2.401, what remains?

Judge Garcia’s Final Judgment is purposeful more for what it does not order than what it does. While Judge Garcia enjoins enforcement of Texas law “prohibiting same-sex marriage,” he does not strike Texas state law providing marriage as between one man and one woman. To do so would effectively strike as unconstitutional all Texas law regarding marriage, with the effect of halting all marriage in Texas – a step that the federal court purposefully avoided. Nor has the federal court written new Texas law. No Texas law provides for same-sex marriage. If anything, Texas law now remains silent upon the issue.

As stated in the dissent, the United States Supreme Court “is not a legislature.” Obergefell, No. 14-556 (2015) (Roberts, C.J. dissenting). As with both the United States and Texas Constitutions, legislative powers are vested with the legislature only. Pursuant to Tex. Const. Art. II, §1:

DIVISION OF POWERS; THREE SEPARATE DEPARTMENTS; EXERCISE OF POWER PROPERLY ATTACHED TO OTHER DEPARTMENTS. The powers of the Government of the State of Texas shall be divided into three distinct departments, each of which shall be confided to a separate body of magistracy, to wit: Those which are Legislative to one; those which are Executive to another, and those which are Judicial to another; and no person, or collection of persons, being of one of these departments, shall exercise any power properly attached to either of the others, except in the instances herein expressly permitted. (emphasis added).

Furthermore, the Tenth Amendment to the United States Constitution provides that:

The powers not delegated to the United States by the Constitution, nor prohibited by it to the States, are reserved to the States respectively, or to the people.

Should the Texas legislature so act, Tex. Fam. Code §§2.001(b), 2.401 could be easily rewritten to provide for same-sex marriages. Instead of “a man and a woman,” the legislature could change the definition of marriage to be between “two (or more) persons.” But, the Texas legislature has not met, nor has it acted in response to Obergefell. Although the Texas Constitution vests legislative powers solely with the Texas Legislature, no action has been taken that would create same-sex marriage under
Texas law. Absent legislative action, no Texas law defines or otherwise establishes marriage between homosexual couples.

The county clerk shall furnish the [marriage] application form as prescribed by the bureau of vital statistics. Tex. Fam. Code §2.004(a). Implicit in this requirement is that the form prescribed by the bureau of vital statistics conform with state law, as it is only from state law by which the Texas Department of State Health Services’ Bureau of Vital Statistics derives its executive branch authority. Tex. Const. Art. II, §1; see also, Brown v. Humble Oil & Ref. Co., 126 Tex. 296, 306 (1935) (“The power to pass laws rests with the Legislature, and that power cannot be delegated to some commission or other tribunal”). In this instance, prior to June 26, that state’s application for marriage license provide blanks for a man and a woman; on June 26, DSHS unilaterally revised the state form to only require information about two individuals. See, e.g., http://www.kltv.com/story/29420782/texas-revises-marriage-license-applications-effective-immediately with https://docs.google.com/viewer?url=http://www.dshs.state.tx.us/vs/field/docs/vs180-(2)-fillable.pdf; https://docs.google.com/viewer?url=http://www.dshs.state.tx.us/vs/field/docs/vs180-(2)-
fillable.pdf.
What law granted DSHS authority to revise this state form that previously complied with still existing Texas state law?[1]

The county clerk may not issue a [marriage] license if either applicant fails to provide the information required by this subchapter. Id. at §2.009(a)(1). Chapter 2 of the Texas Family Code only provides for marriage as between one man and one woman. It does not, for example, provide for a marriage between two persons, whereas the federal court could have struck any specificity defining two person as those of opposite sex. Yet, Texas county clerks have proceeded to issue marriage licenses despite the Texas state law provisions that remain even after the federal district court’s declaration as to the unconstitutionality of “law denying same-sex couples the right to marry.” See DeLeon. As all legislative powers are vested with the Texas legislature, state agencies and local government officials cannot issue same-sex marriage licenses without revision to Texas statutes by the Texas Legislature providing for the same.

Despite no change in Texas law, state agencies, including Teacher Retirement System of Texas, the University of Texas System, the Texas A&M University System and the Employees Retirement System have already implemented policies to award state benefits to same-sex couples beyond the limits of Obergefell and DeLeon. See https://www.utsystem.edu/offices/employee-benefits/same-sex-spouse-eligibility; http://www.texastribune.org/2015/07/01/spouses-gay-public-employees-eligible-benefits/. Do state agencies have current authority to be adopting such policies?

Also, DSHS has already unilaterally revised the state marriage license application form. See, infra. Does DSHS have authority to further revise its policies and procedures to provide other benefits arising from Texas law to same-sex couples, such as revising the state promulgated birth certificate form to allow for same-sex adoptions?

The undersigned asserts that Texas may only comply with the federal Obergefell and DeLeon opinions through action taken by the Texas Legislature, which has yet to occur. Absent the Texas Legislature affirmatively providing for same-sex marriage in order to comply with Obergefell and DeLeon, Texas law remains silent as to marriage
other than between one man and one woman. Therefore pursuant to the non-delegation doctrine, Texas state agencies, including DSHS, cannot act without authorization from the legislature. Without state agency action to implement same-sex marriage, local county clerks lack authority to award same-sex marriage licenses. Therefore, any marriage licenses issued in contradiction to Texas law to date are void.

The end result would be a situation of constitutional crisis. Whereas, the federal judiciary might declare Texas’ system of marriage unconstitutional in totality, thus prohibiting future marriage, no authority exists for the federal government to rewrite existing Texas state law or to step into the state’s place by issuing its own federal “marriage licenses.” The lack of precedent is only surpassed by the unprecedented overreach by the federal judiciary in stepping into the place of the legislative branch, despite the dissent by Chief Justice Roberts. However, our state must not ignore Texas law or our own respect for the rule of law simply out of fear of an overreaching federal government.

III.       SUMMARY
Even after the DeLeon Final Judgment enjoining enforcement of “Texas laws prohibiting same-sex marriage,” the remaining Texas statutes do not provide for marriage other than between one man and one woman. Pursuant to the Texas Constitution, legislative powers are granted only to the Texas Legislature; therefore, only the legislature has authority to revise state law in conformance with the Obergefell and DeLeon decisions. Absent action by the Texas Legislature, execute branch agencies, such as DSHS, have not been delegated authority to promulgate policies or procedures to implement same-sex marriage in Texas or other benefits. Therefore, any marriage license issued in contradiction with Texas state law or other policy unilaterally awarding benefits to same-sex couples are invalid.

We urge that you issue an opinion in conformance with this analysis. Specifically, we request that you agree that, due to the language of current Texas law, only the Legislature’s revision of existing statutes may implement the Obergefell and DeLeon mandates. Absent action by the Legislature, any state agency or local political subdivision action to award marriage or any other benefit arising under Texas law to same-sex couples is invalid.

[1]              Assume, arguendo, that DSHS revised the state marriage form to allow for more than two individuals to marry. What authority would prevent this definition under Texas law as opposed to DSHS’s unilateral change to provide for same-sex unions?