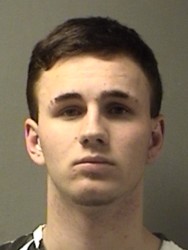 An 18-year old from Winnsboro was arrested for the early Friday morning armed robbery of a couple in Hopkins County. Jason Floyd Koenig Junior faces a charge of aggravated robbery. A couple reported that they were robbed by a man with a .22-caliber pistol just before 3 a.m. At Highway 11 West and County Road 4703 Century Lake Road. The man took a wallet and a purse. A short time later, Sheriff’s deputies arrested a suspect. In his vehicle they found a .22 pistol, brass knuckles, stolen property, drug paraphrenalia and some marijuana. During booking, two Xanax pills were fiund on his person.