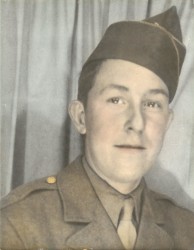 Mr. Gowin was born on September 14, 1925, in Dunbar, to Rance Garfield and Carrie Belle Giles Gowin.  He proudly served our country in the U.S. Army.  W.D. worked many years at Ling-Temco-Vought.  He later retired, in 1988, after 19 years of service as Sergeant with the Mineola Police Department.  On January 4, 2003, he married Marie Rodgers in Emory.  He was of the Baptist faith.