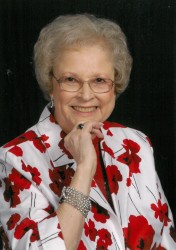 Velma passed away Sunday, June 28, 2015 at Washington Regional Medical Center in Fayetteville, AR.  She was born in Hopkins County, TX on March 26, 1933 the daughter of Ezra C. and Rosa Bell (Duncan) Houston.  She married Buford Owens on February 15, 1953 in Sulphur Springs. He preceded her in death.  She was a retired Loan Information Officer from First National Bank and member of Central Baptist Church.