Pribble Plaque To Be Placed Wednesday 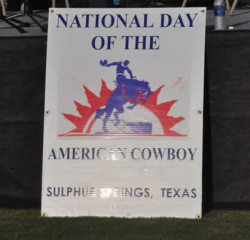 KSST’s Enola Gay became interested in public recognition of late rodeo producer Mike Pribble during local National Day of the American Cowboy events she organized in recent years. Along with Enola, many others hoped this local goodwill ambassador on horseback could one day be honored for putting Sulphur Springs on the “rodeo map”, and now the dream is finally becoming a reality! Thanks are due to those individuals and sponsors responsible for the beautiful bronze plaque. It is to be placed permanently where it belongs, on grounds used by Mike during Fourth of July rodeos he produced and held for four decades. The unveiling and dedication will take place on July 1 at the Civic Center’s Equine Pavilion. Mike Pribble, world-class trick roper and rodeo producer, was also a Christian, a Veteran, a gentleman and a family man to boot. During July, when our nation’s birthday is observed and American flags are waving all over our nation, let’s wave ours for this native son. Everyone is invited to attend the dedication ceremony on Wednesday July 1 at 12 noon at the north entrance to the Equine Pavilion.