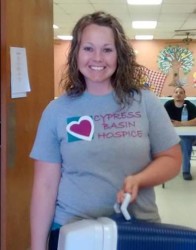 Karon Weatherman, Director of the Meal-a-Day Center in Sulphur Springs, noted a heroic act by one of the volunteers who deliver meals. Shasta Hoffman, who works for Cypress Basin Hospice, drives a Meal A Day route every Wednesday according to Weatherman.

Wednesday, June 3, when Hoffman went to one of the Seniors on her route she noticed that the house was full of smoke.  Weatherford said that when Hoffman went in to check on the senior and found that they had left a pot on the stove and it was on fire.

Weatherford said, “Shasta put the fire out and opened all of the windows to help clear out the smoke. She notified me so that I could notify the family.” Hoffman stayed with the Senior until the family could arrive at the house and check on them. “I am so thankful that Shasta was in the right place at the right time or the outcome could have been a lot different,” stated Weatherford

Praising the volunteers, Weatherford pointed out, “All of my Volunteers are so Loving and Caring towards the Seniors. I could not ask for better Volunteers. Meal A Day is much much more than just making and delivering meals. We check on our Seniors to make sure that they are doing OK every day.”