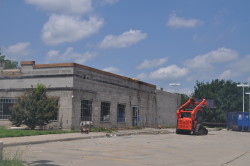 If you have driven by the old KFC building lately, you probably have seen a LOT of activity.  KSST News stopped by and talked with Michael Churchman, one of the new owners of the old Kentucky Fried Chicken building on the North side of I-30 next to Holiday Inn Express.  Mr. Churchman and two other partners, Abel Austin and Chris Penny, purchased the building back in February with plans only to remodel and lease or sell the property when complete.  Crews have been working diligently to remove any debris and prep the outside of the building for a new facade.  “You won’t recognize the building when we get finished on the outside”, said Churchman.  He told KSST that they would dress up the outside with a new stucco material as well as rock accent.  They are also working to clear out the inside, to have an open floor plan for whichever tenant chooses to occupy the building.  Rumors have been rampant as to who may be occupying the building.  But as of today, there are no firm plans in place of a tenant.  So, for now, fans of WingStop, or Waffle House, or even Olive Garden (just some of the latest rumors) will have to wait and see what chooses to locate in Sulphur Springs.  KSST will keep you posted on the progress of the building.  Any interested parties wanting more information on leasing the building can contact Michael Churchman at 903-348-8939.